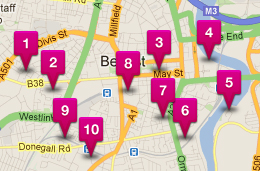 50 Red Plagues mark the locations of these venues and will be displayed throughout the 2012 Festival.

This is a representative survey of some of the venues that have been used during Festival since 1961. Festival uses a wide range of venues and public spaces which changes year to year.

These venues were chosen to represent the broad spectrum of venues from the unusual, community focused to traditional.

Corner of Joy Street and May Street, Belfast