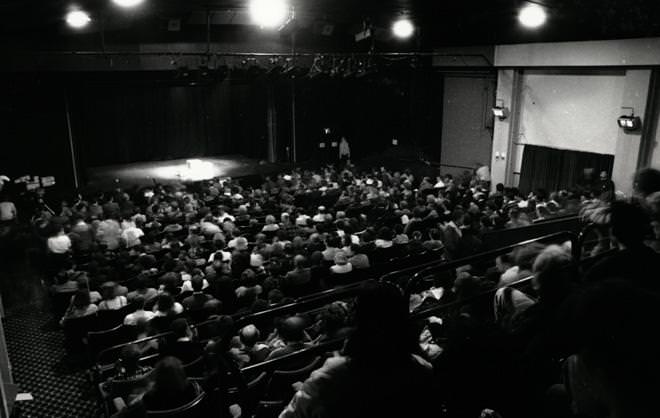 In 1994, Michael Barnes retired after a long and distinguished time at the helm of the Festival. For many Michael became synonymous with the Festival, representing it from 1973 to 1994, over 21 years. Robert Agnew took over as Festival Director and then later Executive Director in the late 1990s. Barnes had created links throughout the entertainment world, and on his passing in 2008, tributes to him were paid by not only the Festival, but figures such as Michael Palin and Bill Kenwright, showing Michael's ability not only to build relationships with artists, but also for him to have commanded respect from producers and the money men of the performing arts sector.

With a new Festival Director, the Festival enjoyed a new lease of life, bringing a more experimental programme to audiences. When Agnew became Executive Director, Sean Doran was brought in to programme the Festival in 1997, followed by Rosie Turner, who had begun as a marketing officer for the Festival in the early 1990s. New approaches were tried, themes were adopted for the Festival for the first time, and the Festival developed and broadened its horizons artistically. The Festival involved itself in the development of the arts throughout the city, being involved with the Old Museum Arts Centre and Wheelworks, the youth arts activity helped set up better provision for children and young people. This effort resulted in the Belfast Children's Festival now run by Young At Art, but originally ran under the Belfast Festival umbrella.

However the Festival was no longer the only show in town. The rise of Féile an Phobail in West Belfast had demonstrated a wider need within the city for arts activity outside South Belfast, and Festival had to react quickly and fast in order to create its own brand in the rapidly changing city landscape. Bringing visual arts to the forefront of the programme, allowed the Festival to tap into a more experimental, and at times challenging output. The difficulty was that Belfast audiences had enjoyed for many years a wider mixed programme with much home-grown material within it, some felt that the Festival, while bringing high quality work to Belfast had lost touch slightly with its audience.

With more arts activity in Belfast came greater competition for funding and a difficult time for the Festival was when Guinness retired as the major sponsor of the Festival, after the longest period of sponsorship in the arts in the UK. As financial pressure grew, so did the Festival's need to carve out a niche of its own, now that Belfast was being marketed as 'The City of Festivals'. Crises were reached in 2007 when, without a main sponsor, the Festival was bailed out by the Arts Council Lottery Funds. Under Graeme Farrow's directorship a 'Save the Belfast Festival' campaign was launched in partnership with the Belfast Telegraph.

The campaign was successful in that it reawakened the city's care for the Festival and made Belfast think of what it would miss if the fortnight in November was gone. Farrow also secured new long term sponsorship from the Ulster Bank and the future, for now, of the Festival seems secure.