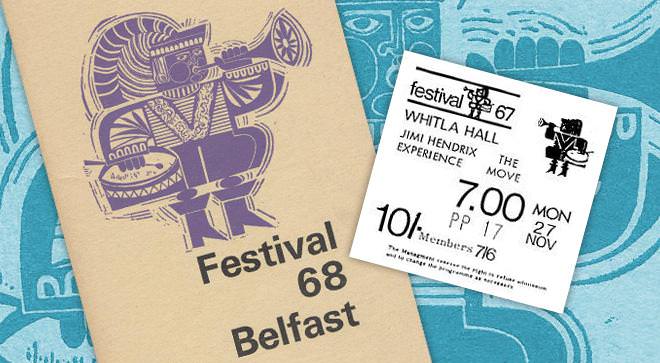 This is the story of a Festival. The money, the people, the tears, the advertising, all make the story of the Belfast Festival. At its heart however, this Festival is about the sheer pleasure of art, the life changing benefit of attending a gig and the symbol that art can be for a city. Seamus Heaney, who plays a part in this story of the Belfast Festival, spoke of it being a ritual of a city, valuing art and valuing the enjoyment of the arts.

In December 1961, the Student Representative Councils, Societies' Committee, took a decision to gather some of the artistic societies together under the umbrella of an 'Arts Festival '61'. This Festival was organised by the Societies secretary, Brian Apfel. The programme contained the Dramatic Society's performance of Coriolanus, a sell out at the Whitla Hall. The Jazz Club, with help from local record store owner Solly Lipsitz, put on a selection of local bands, including the Embankment Six, the Rodney Foster Jazzmen and the Norman Watson Quartet. The 1962 Festival saw the societies being organised by Sheelagh Fullerton, with the Drama Soc contributing a production of Brecht's Galileo directed by arts faculty lecturer, Gamini Salgado. Overall, reaction to the two festivals was mixed to say the least, although The Gown, the student newspaper records one 1st year arts student as commenting, 'the jazz was so primitive, I really dug it'.

John Teasey took over from Fullerton as coordinator for 1963, but left before delivering a Festival. For 1964 however, a new approach was tried. With a decision which would have wide ranging consequences, the University appointed one Michael Emmerson as the first Festival Director. Emmerson's vision of what a Festival could be was to make a huge mark on the development of the arts in Belfast, and it was he who was truly the creator of the Belfast Festival we know today. Chair of the English Society in 1962 and 63, Emmerson was ably assisted by his brother Tony, and was granted a secretary, Mary Mills, and an office by the university. Emmerson began the Belfast Festival proper on the 10th February 1964. The Societies of the university were still involved, but Emmerson began to bring in professional acts, bringing over Anthony Burgess who read from his recent book, A Clockwork Orange, and Tubby Hayes, then the star of British Jazz. The Festival was a success with even The Gown welcoming Emmerson's impact.

With the support of Sir Tyrone Guthrie, then Chancellor of the University as well as one of the world's leading theatre directors, and Havelock Nelson, Emmerson launched the '64 Festival Part II in November, as it was 'such a horrible dreary month that it needed cheering up'. The second '64 Festival cemented Emmerson's vision of a festival that shared his love of the arts with the widest possible audience, coupled with a desire to see Queen's take a lead role in the community.

Belfast Festival has had a reputation of delivering an accessible programme of events across its 50 Festivals, and this began and grew with Emmerson. While you cannot please all of the people all of the time, Festival with a few exceptions has always managed to stay true to this vision.

As the 60s continued, Festival caught a wave of creativity that swept through Belfast, with Festival at the forefront. Known for their opulent programmes, edited initially by Angela McCourt and then taken over by journalist Ian Hill, the performers got bigger and bigger, the stages were filled with international artists such as Jimi Hendrix, Cilla Black, Norma Burrowes. The Festival also branched out and created work, being the first to publish Seamus Heaney, Michael Longley, Derek Mahon and Stewart Parker. Emmerson and his team created links with Dublin artists, bringing the RTE Symphony Orchestra and making Sean O'Riada 'Composer of the Year' in 1965.

By 1969 the Festival had grown to such a size that it boasted 147 events over two weeks, and yet the developing political situation was having an impact on what the Festival could achieve and what the city could bear. The priorities of the city had changed since the days of 1964, that spirit of adventure and open mindedness was gone, and with it, for a short time did the Festival.