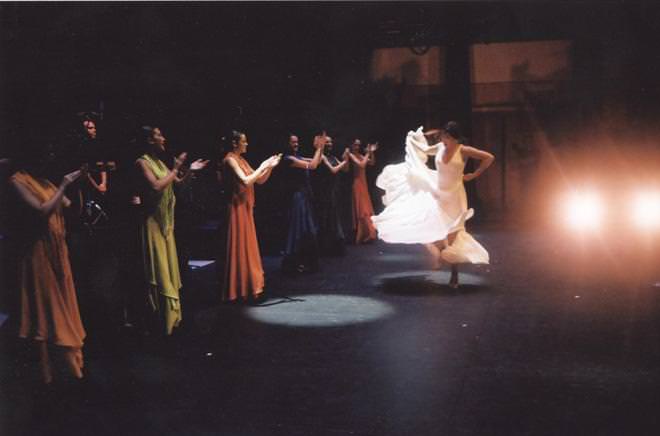 Dance as a medium has been part of the Belfast Festival since its inception, when the International Relations Society put on a song and dance event as part of the 1962 Student bash.

Throughout the 1960s, the programme usually featured some dance events, through Irish groups such as the Belfast Modern Dance Group and the Belfast Ballet Group.  The 1964 Festival featured the Patricia Mulholland Irish Ballet’s Company.

The first major Ballet company to visit the Festival was in 1965 with the National Ballet Company performing at the Grand Opera House, and in the 1970s companies such as the Scottish Ballet, the Canadian Winnipeg Ballet and the Royal Swedish Ballet brought classical dance to the stages of Belfast. The Royal Swedish famously loaded three Aga cookers onto the trucks returning home - apparently the products were cheaper in Belfast than in Sweden.

Highlights from the 1980s began with the Irish National Ballet joining with the Chieftains to create a version of JM Synge’s "Playboy of the Western World". Aterballetto brought one act performances of Cocteau, Massine, Satie and Picasso’s "Parade", with the original 1917 Cubist designs for set and costume. The extra instrumentation demanded that Erik Satie’s score included a typewriter – a new experience for the Ulster Orchestra players.

A generous subvention from the Belgian government brought the Royal Flanders Ballet, with "Romeo and Juliet", and Ballet du Nord brought "Coppelia" in 1987. The first company to visit with electronic music was the Alwin Nicholas Dance Company from New York in 1983.

As the Festival entered the 90s, the rise of modern dance in the programme increased, with the Festival moving away from the traditional big hitters of the classical ballet world. The Yes/No People brought "Stomp" to the Arts Theatre, long before the show became the international giant it is now. Siobhan Davies Dance Company, Trisha Brown and the Aboriginal Islander Dance Theatre brought a wider cultural mash to the dance offering and in 1997 Sean Doran and Robert Agnew brought over Merce Cunningham, one of the world’s greatest living choreographers, to work on "Ocean" in collaboration with John Cage on his "Roaratorio" installation at the Waterfront Hall.

Acts like Students of the Asphalt Jungle, who came in 2003, created a wider appetite for contemporary dance in Belfast, with the next few years seeing modern dance being brought to the foreground and classical ballet becoming slightly more thin on the ground. Lucy Guerin’s work, "Reservoir of Giving 1 and 2" was a hit in 2005, and the Russell Maliphant Company presented "Transmission".

The visit of Carlos Acosta, a booking that took Graeme Farrow three years to complete, has been one of the coups of recent years. That the most widely known dancer, the Nureyev of his day, came to Belfast was a tremendous vote of confidence in Belfast Festival.

While we have discussed the various professional and artistic dance visitors to the Festival, it’s worth remembering that some of the most memorable events are the various Festival Balls that were held through the years, and in the early days, the ‘dances’ that were held in the Union Diner, featuring bands like Salena Jones with The Green Angels or Chris Farlowe & The Thunderbirds. Festival was in part a party, and no party is complete without a little dance.