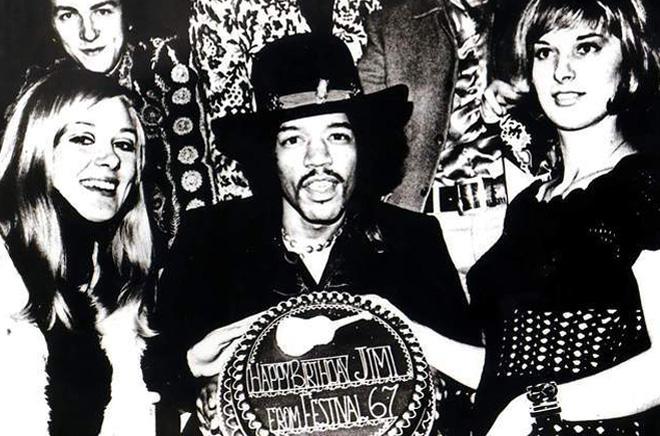 From humble beginnings, over the years pop and rock has muscled its way into the programme of the Belfast Festival.

As with any Festival that came into being in the 1960s, pop and rock and all forms of popular music were to play a surprisingly small part in the development of the profile of the Belfast Festival. The most famous evening in that time was when Jimi Hendrix and the Experience came to the Whitla, supported by The Move and Amen Corner.

As ever with these types of gigs, if everyone who said they were there was actually there, the event would have had to have been held in Wembley, but Jimi Hendrix playing live at the Whitla Hall has entered the folk memory of the Festival. Memories of the night are usually centred around the fact that the guitarist was celebrating his 25th birthday that night, but Anna Caragher remembers that the Festival had to hire another car to bring his guitar from the airport. All accounts refer to Hendrix being mild and affable offstage, playing "Thank You Very Much" in response to the presentation of a birthday cake, although on stage things got a bit heavier, with The Gown reporting that the music was ‘ear splitting’ and ‘kaleidoscopic’. Mr Hendrix apparently made an ‘indecent assault upon the amplifier’, and smashed the guitar that was carefully brought from Aldergrove.

The home-grown R&B explosion and the psychedelic scene of the era was represented by Belfast’s first known ‘happening’, The Afterthought, which was held in the McMordie Hall. Featuring ‘Poetry readings, jazz, blues, drama, ballet and painting in an entirely free form’, music was provided by Van Morrison and Them, featuring a 20 minute version of "Gloria". That same year, 1967, saw Cilla Black appear at the Festival, and Rolf Harris visited in 1969, bringing his affable antipodean charm to the Whitla Hall.

The 1970s and 80s saw very little, if any, pop or rock events programmed. In 1982, the Ulster Hall saw Dexy’s Midnight Runners play, just after their huge no.1 hit "Come On Eileen". In the same year, The Flying Pickets played the Arts Theatre. Prince Charles’s favourite group, The Three Degrees, bought a dash of glamour to the Elmwood Hall in 1984, and folk/rock legend Loudan Wainwright played two nights at the Grand Opera House. The next pop gig in the programme was the Communards in 1986, and Van Morrison and Nimajazz played the Whitla on the 13th November that year.

One of the most memorable gigs in Festival history was the night Billy Bragg was booked to play the Ulster Hall, the 22nd of November 1990. Bragg was supported by Andy White, the local troubadour. That night happened to coincide with the resignation of Margaret Thatcher as Prime Minister. For a singer who had campaigned against the policies of Thatcher’s Conservative government since the start of his career, this was an emotional night. Reports of the evening saw Bragg enter the stage with a copy of that evening’s Belfast Telegraph, with the headline saying more than he could.

In the 90s, pop and rock began to muscle its way into the programme.  Desmond Dekar played the 1991 Festival Ball, and James brought the late Manchester scene to Belfast.  As the 2000s came along, it was usual to have a number of pop and rock gigs scheduled in each year. Highlights over recent years include hip-hop legend Roots Manuva in the Empire Music Hall and Jonathan Richman at the Limelight. The strange world of Bonnie Prince Billy invaded the Elmwood Hall, and the deep noise of Mogwai came to the Students Union. The Belfast club Shine worked with the Festival in the late 90s and early 2000s to bring big dance acts like The Orb and Jon Carter, and most recently indie bands like Elbow have played the Opera House.