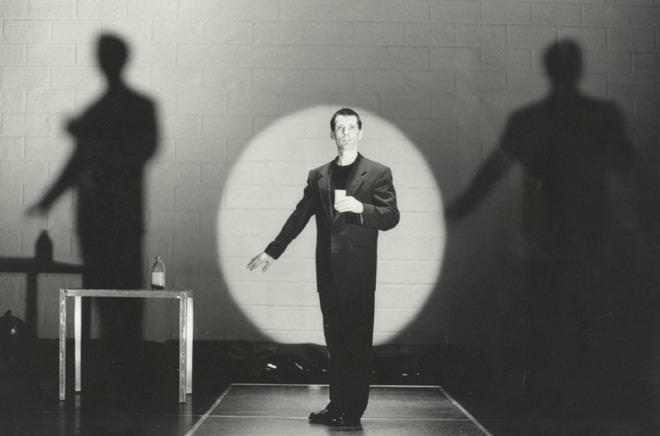 Over the years, the Belfast Festival has played host to some of the UK's most prestigious theatre companies.

Early theatre in the Student Arts Festivals was driven by the Drama Society, who produced "Coriolanus" and Brecht's "Galileo" in 1961 and 1962. Due to the lack of medium-sized theatre venues when Michael Emmerson took over, he put an emphasis on music as opposed to drama. However, in the breach, the 60s Festivals managed to deliver some outstanding coups. First amongst them was the visit of the National Theatre, then directed by Sir Laurence Olivier. The National Theatre had been in existence for only two years, but brought its stellar cast, featuring Albert Finney, Lynn Redgrave, Billie Whitelaw and Bangor's own Colin Blakely. Reviews for the show at the Grand Opera House were outstanding – 'Theatre as Belfast has rarely seen before: brilliant and bawdy', said The Belfast Telegraph.

In Tyrone Guthrie's time as Festival President, big names such as Dame Flora Robson visited the Festival and Guthrie held a reading of Eugene McCabe's "Swift" at the Social Science Building (now the Sir Peter Froggatt building). Other highlights include Jack McGowan’s Samuel Beckett musical, "Beginning to End". Local theatre space grew as the Arts Theatre was opened on Botanic Avenue in 1966 and the new Lyric Players Theatre in 1968. Other standard bearers for local drama were the Circle Theatre who operated on the New Lodge Road. They and the Festival commissioned local writers David McGibbon and John Boyd who created "Milligan" in 1965 and "The Blood of Colonel Lamb" in 1967, which was perhaps the first piece of work to give a sense of the civil strife to come.

When the Festival returned in the early 1970s, the first visiting star was Siobhan McKenna who brought Sean O'Casey's "Juno and the Paycock" to a sell-out audience.  It ran for an extra week. The Traverse Theatre from Edinburgh brought Cecil Taylor's "Shippel" to the Old Library, which, while very atmospheric, had no heating. Audiences were described as having 'dressed for the Winter Olympics'. Notable local productions have included the hugely influential Marie Jones play, "Somewhere over the Balcony", produced at the Arts Theatre in 1987, and "Convictions" in the abandoned Crumlin Road Courthouse.

One of the highlights throughout the 80s Festivals were the visits of the Royal Shakespeare Company who brought work to the Whitla Hall throughout the decade.  Student volunteers were press-ganged into ensuring that the Stratford stars had clean clothes at all times. The ability of a large-scale touring company such as the RSC to transform the Whitla was memorably summed up by one Festival worker as creating a 'wonderland within a wardrobe'.

Smaller theatre companies have had their time, with particularly memorable acts including "Disco Pigs" starring Cillian Murphy, the world premiere of "Ransom's Hurricane" and Mad Cow (now Prime Cut)'s production of Trevor Griffith's "Who Shall Be Happy..?". Kabosh brought their production "This What We Sang" to the Belfast Synagogue on the Somerton Road in 2009 to sell out audiences.

One of the major theatre venues was the theatre in the Stranmillis College, which saw the National Theatre return in 1992, with Dario Fo's "An Accidental Death of an Anarchist", starring Alan Cummins. The Lyric Theatre hosted a particularly rich number of years in the early 80s, with "Tea In a China Cup" by Christina Reid being a particularly successful production.

The Festival has always used an ingenious attitude to theatre in unusual spaces, such as the 1998 Tinderbox production of "Northern Star" by Stewart Parker at the First Presbyterian Church on Rosemary Street, a play which had been premiered by the Lyric Theatre in the Festival of 1984. Or Barrow Square, near Clarendon Dock, for a production of "Macbeth" in 2009. "Limbo", produced by Sneaky Productions, was held under the River Lagan in the tunnel of the Lagan Lookout.