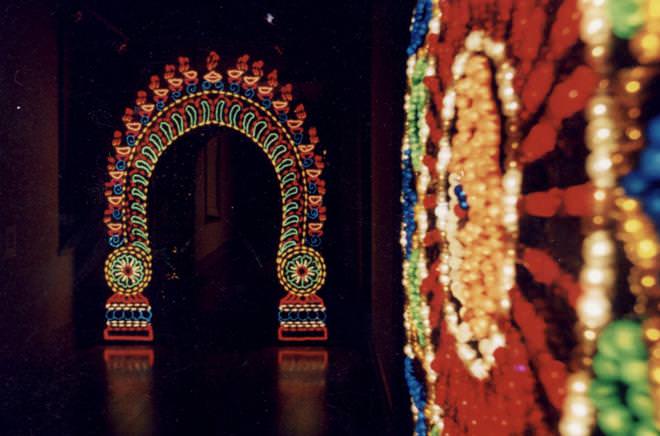 Landscape painting, contemporary art, conceptual art, performance art, photography and more; there are many kinds of expression that make up the art world.  Festival has brought a wide range of different forms of visual art to Belfast.

In the early days of the Festival there was an understandable emphasis on the student body, with work from both Queen’s and Belfast College of Art being shown along with renowned local artists such as Colin Middleton, TP Flanagan and Basil Blackshaw.

Michael Emmerson brought Bill Papas, famed for his cartoons in "The Guardian" to the Festival, and his displays of lively watercolours were described as having brought a 'shaft of Mediterranean light to Belfast in November'.
With the return of the Festival in 1972, a relationship with the Ulster Museum yielded a rich vein of exhibitions often curated by Ted Hickey from the museum staff. The first year saw a fascinating collection of exhibitors around the loose theme of maps, with Alec Issigonis and his designs for the Mini and Morris Minor taking centre stage. Throughout the 70s, the museum brought high quality work to the Festival with shows such as the photography of Henri Cartier-Bresson and the Joseph Beuys exhibition "The Secret Block for the Secret Person in Ireland".

Despite the presence of visual art in each Festival, it wasn't until the 1990s, under the directorships of Robert Agnew, Rosie Turner, Sean Doran and Stella Hall that visual art came to the forefront of the Festival programme. Up until the 1990s there was a lack of city-wide platforms for visual art, especially the newer art forms, but this began to change with the opening of new galleries and spaces, and the Festival exploited the opportunity.

In the late 1990s, a new partnership with the Ormeau Baths Gallery and its Curator Hugh Mulholland saw exhibitions arrive in Belfast from some of the 20th century's most prominent artists, such as David Byrne, who ended up walking the streets of the Holylands looking for a party he never found, Bill Viola, Yoko Ono and Gilbert and George, whose show attracted perhaps the last great obscenity protest, due to the nature of the 'human matter' depicted. Well remembered is the 1997 site specific Han Peter Kuhn show, in the Gasworks Klondyke Building.

With the opening of the Naughton Gallery in 2001, the first purpose-built gallery in the University, a new energy was found in the directorship of Graeme Farrow and Stella Hall, supported by Shan McAnena as the Queen's Curator of Art. Commissions and international exhibitions brought a profile to the Festival and had a high impact with audiences. The Diwali Lights and Day of the Dead exhibits and associated events, for example, lead the programme of the overall Festival as opposed to being merely a player in the background.

The Festival in recent years has worked with local galleries such as the Golden Thread, providing a platform for their work through the marketing power of the Festivals. The Golden Thread's Collective Histories of Northern Irish Art is now entering its ninth year.