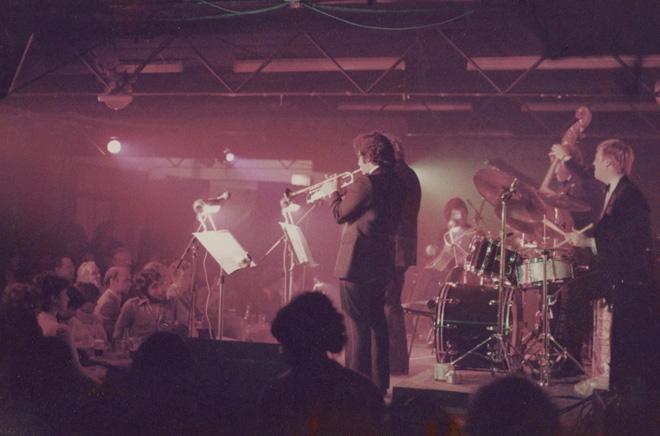 Jazz played a key role throughout the early Festivals, and is still a major element of the programme today.

Jazz played a key role throughout the early Festivals, with the Jazz Society gaining the assistance of local music promoter and owner of Atlantic Records, Solly Lipsitz, who put on locally based bands such as the Embankment Six and the Malcolm Gooding Big Band in 1962.

When Michael Emmerson took over the Festival in 1964, one of the first international jazz stars he brought in that February was the British multi-instrumentalist Tubby Hayes, who played the Whitla Hall with local musicians. Another musician brought from London in that year was Humphrey Lyttleton, who was to return to the Festival throughout the next 30 years on a regular basis. His 1964 concert was a huge hit, with local newspapers eagerly reporting that he had been called back on stage for three encores.

Dixieland jazz was enormously popular, with the local group, The Apex Jazz Band, beginning their long term relationship with the Festival with lunchtime sessions at the City Hall. As the 1960s continued, the stars became bigger, with 1969 seeing John Lee Hooker play the Whitla with the British group The Groundhogs, and Cleo Laine and Johnny Dankworth beginning with a small gig at the Harty Room, but returning with their big band later in the decade.

Michael Open, Administrator of the QFT, remembers Memphis Slim playing the Whitla in 1969 as a particular highlight, defying his manager to perform encore after encore. One who didn’t make it was Stan Getz. In 1966, at the height of his career, the Emmersons brought him and Astrud Gilberto, of "Girl from Ipanema" fame, to the Whitla. Unfortunately, Getz got to his hotel, but was found to have got a cab back to the airport before the gig. Luckily Tony Emmerson was able to introduce Astrud Gilberto, and only 3 punters of the 3000 who saw the gigs over the next few nights took up the offer of a refund.

In 1972, the jazz programming was taken over by Peter Jupp. Jupp, assisted by Gary Mills, revelled in the opportunity that the Guinness Spot, which was the South Dining Hall next to the Whitla Hall, brought, travelling extensively throughout America and Europe to bring the finest names to this small, intimate - if temporary - club. Ex US Presidential candidate and jazz legend Dizzy Gillespie was just one of the American-based legends who warmed November in Belfast. Others included Zoot Sims, Benny Carter, Buddy Rich, Illinois Jacquet and many others. Peter Jupp retired from the Festival in 1988, and the organisation of the jazz programme was taken over by Brian Carson, the founder of Moving on Music. Carson brought in, controversially at times, events which took in the more avant-garde elements of jazz. Artists such as Steve Lacey were deemed too inaccessible and experimental for a festival programme by the press. Luckily however, Carson persevered in bringing risky acts to the Festival, with Ornette Coleman, who had been at the forefront of experimental music since he released "The Shape of Jazz to Come" in 1959, visiting the city and playing a number of gigs throughout a week-long residency.

The Guinness Spot wound down in the 1990s and 2000s, with the cost of setting up a purpose-built hall and health and safety issues becoming too much to justify. However, jazz, both in its more accessible and experimental forms, is still a major element of the Festival programme and keeps the Festival in touch with its early 1960s roots.