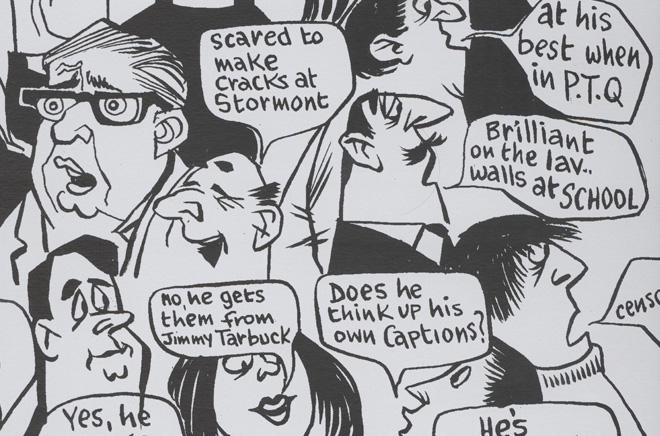 The Festival has been since its inception a driving force of debate, talks and literature in Belfast.

As head of the English society in 1962 and 63, Michael Emmerson, the Festival’s first formal Director, had an obvious emphasis on the spoken and written word in the 1960s programmes. Queen's has often been seen as a centre of literature in Belfast, and the 1960s with the impact of the 1945 Education Act saw a much wider range of voices beginning to find themselves. Festival gave these new voices a platform. Among them were Seamus Heaney, Derek Mahon and Michael Longley, but the great wellspring of writing in Belfast at that time wasn't confined merely to those three. Future Festival favourite playwright Stewart Parker, Joan Newmann, James Simmons, Norman Dugdale and Philip Hobsbaum, who was a senior lecturer of English at the time, and organised the famous Group readings, also flowered in tandem with the Festival.

The Festival commissioned many of these writers into a series of poetry pamphlets, publishing new voices for the first time. These pamphlets are now highly sought after and are a good example of how the 60s Festival seemed to have an uncanny knack of uncovering and giving opportunity to new voices.

Visiting writers included a personal favourite of Emmerson, Anthony Burgess, who read from the manuscript of "A Clockwork Orange" in February 1964 and returned to discuss "Finnegan's Wake" in November.  Simon Gray lectured on the novel and the screen, and Patrick Kavanagh arrived in 1964's November Festival to talk on The Poet's Life and then got into a spot of bother in the Club Bar (now the Elms Bar).

Tony Emmerson, a 1960s Festival Organiser and brother of Michael Emmerson, remembers a particular writer: 'Alex Haley was over before "Roots" was published. We wrote to his publisher to see if he would come over and the address said 'Rome', which Michael assumed was Rome, Italy but it turned out it was Rome in New York State. We then had to write and say we couldn't afford to pay and Haley got back to us and said, "Don't worry, I'll get someone else to pay," and he ended up getting "Playboy" to pay for the trip. At the time he was researching his roots, and he was sure that in his ancestry there was a slave owner who came from Carrickmacross. He hired a car and drove to find gravestones, it was a bizarre sight to see a young black man researching grave stones in a Monaghan Churchyard.'

The Festival has continued to bring speakers from across the world to discuss a variety of topics, for example George Melly discussing Picasso, John Suchet discussing Beethoven, and Sir Richard Attenborough and David Lynch discussing film at the QFT. Politics has always been an important element in Festival, creating debate with figures such as Mary Robinson, Archbishop Desmond Tutu and Neil Kinnock speaking through the years. Local politics was also highlighted through the Talkback debates of the early 1990s, with local politicians going head to head live from the Festival. The 70s Festival saw two now stellar figures bring their early personas in Anthony Hopkins and Ian McKellen (both now Sir respectively).

2006 saw the launch of "The Blackbird's Nest", a collection of new Northern writers, with a gala show in the Whitla Hall, neatly echoing the 1960s revolution, and 2009 saw Graeme Farrow's directorship bring together Heaney and Longley to perform with the Ulster Orchestra at the Waterfront Hall to celebrate their respective 70th birthdays. As the undergraduates were now old poets they took memories of woollen rugs in Tates Avenue, to, in Longley's words, ‘regurgitate/Pellets of chewed-up paper/packed with shrew tails, frog bones/Beetle wings, wisdom'.